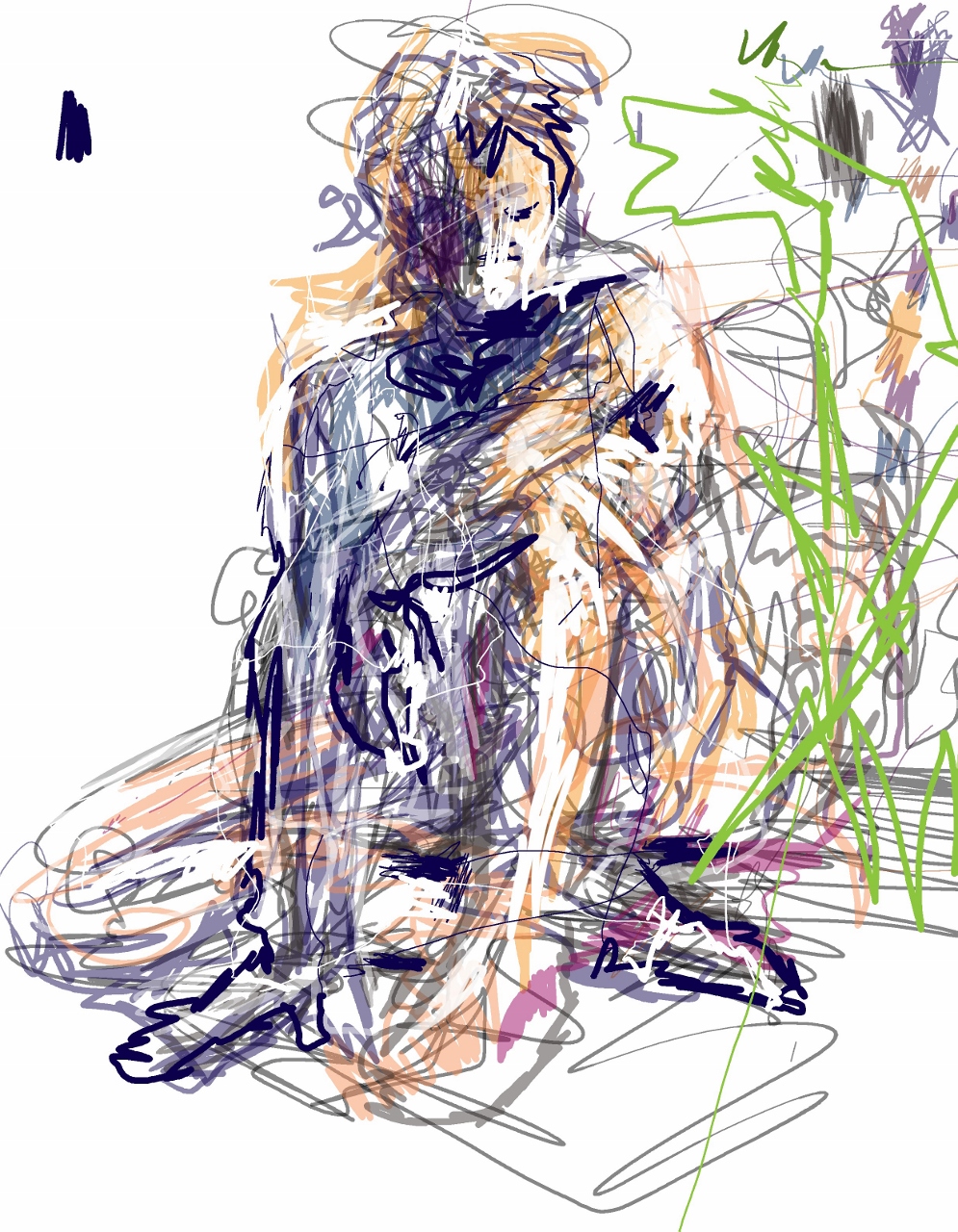 What John does for a living (listen here)

She is already on the podium, her long tee-shirt discarded, the artists already in front of their papers or behind canvases on easels fingering charcoal or poking at their paints when the new model, John, comes out of the toilet where he went to change as though shy. John who seems nervous and a bit excited, who she found out does not paint in his spare time or even have an interest in art; who is not at all creative (what would the point of her life be if she were not creative) but works for Ellison’s all round Harrogate. Even though her toilet needs mending she makes it quite clear with her body-language that she does not have the remotest interest. Derek is setting them up in the pose he wants; he likes to book a male and a female together sometimes. Some esoteric idea in his mind’s eye. He was always like that. For the first half-hour she is standing and John is sitting and she has her hand on his tanned back. The second half-hour she is sitting and he is standing with a hand on her shoulder and she feels his weight shift, he is moving a bit. He is rubbish at it. They can’t get the younger-end male models says Derek. In her head she is working on a poem (one of a series about being childless) because that’s what she does, she’s a poet, which is why she has always gone for creative types who do not have conventional day-jobs but who live in garrets or on houseboats and don’t have tellies or tattoos or sun-tans; pasty-white skinny artists with whom she feels like-minded, who are penniless and utterly incapable of commitment (though intense and passionate, and she insists she would do it all again), who live at an oblique angle to life because life – and this is her hobby-horse – life is not Pizza Hut, is not stag nights in Ibiza or pubic hair cut into shapes or a powerful motor. Three times in the last fortnight this man John has texted her (Derek gave him her number) despite being half her age, wanting to take her for an Indian and discuss poses. Derek, to give him his due, proposed marriage until the miscarriage. He used to sculpt ballerinas when at art college (he said he had a lot of fun with them, something about clamping their nipples with a measuring implement). Her response to John was blunt. John, you’re a plumber. Scuffed wood of the podium. Yellow paint-spot. Their skin making very light contact. On the periphery of her vision, the heap of her black tee-shirt, someone’s thermos, the parcel of John’s scrotum, Derek a ghost with a twitching brush and oh for god’s sake, John’s pink adder-head becoming alert. Though he’ll have a high sperm count. And she thinks of the puddle round her toilet. Derek wanted this to happen. You’re a bit Pizza Hut yourself, aren’t you Derek, a bit Ibiza. [published in KUNST]